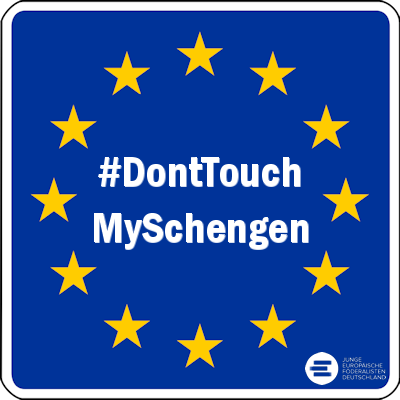 The Young European Federalists of Germany  (JEF) are deeply concerned about the reintroduction of passport controls at the German-Danish border. The oldest pro-European youth organization considers this as an attack on freedom of movement – one of the most important achievements of European integration – as well as a threat on intra-European mobility.

In the light of Europe’s refugee crisis, the Schengen Agreement is on the brink of failure. After Finland and Sweden have recently restored passport checks, now the Danish Government chose to follow them by reintroducing passport checks at the German border. This provokes a serious domino-effect which could ultimately lead to the end of the Schengen-system with open internal European borders.

“The exception has become the rule. Our open borders are increasingly often the victims of national solo efforts. Instead of clinging to alleged national sovereignty, Europe should work together. Only that way, Schengen – as one of the most important achievements of European integration – is able to permanently survive,”, David Schrock, President of JEF Germany, says.

According to Schrock, first and foremost the establishment of a Single European Asylum System replacing the failed Dublin Regulation is much needed. Secondly, he calls for the creation of a European Border Cost Guard. Thirdly, Schrock urges decision-makers to introduce the Harmonization of Immigration and Asylum Policies in the EU.

“If several member states are not willing to reform the Schengen-System, our European idea is threatening to fail soon. Lastly, the freedom of movement is an integral part of  European identity. When it comes to tackling cross-border challenges in the 21st century Europe is not a question of solidarity; it’s a question of subsidiarity”, Schrock comments.

The Young European Federalists of Germany (JEF) are a bipartisan youth organization with thousands of members. Since more than 60 years, JEF fights for a united and democratic Europe. JEF Germany is a part of the European umbrella organization  of JEF Europe.